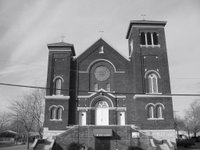 St. Thomas Parish, at Shawnee & Pyle in the predominently Hispanic Argentine neighborhood, is no more. This church isn't located in the heart of old Kansas City, Kansas; instead, it's down in the Kaw (Kansas) River bottom quite a distance south of the neighborhoods built by the various Central and Eastern European immigrants we're about to tour.

As you can see, the church's cornerstone was laid in 1917. Being without any history as of yet (I've got a few leads on it), I'm not sure when St. Thomas was surpressed, and I couldn't get inside, 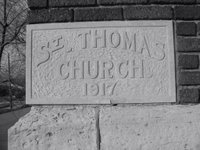 but judging from the signs for the "Cross-Lines" community service center and the fact that the stained glass has been removed throughout the building, it is apparent that the church interior has been stripped.

As I said as I was touring two closed churches in Missouri, Our Lady of Guadalupe and Holy Trinity, that are in neighborhoods populated predominantly by Mexican immigrants and their descendants, I'm amazed that a Catholic parish can't make it there. 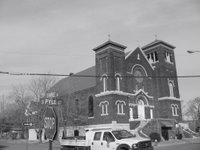 Admittedly, the part of the Argentine area in which St. Thomas is tough--mostly industrial facilities in the Kaw (Kansas) River bottom, with the sense that the area has depopulated over the years, and I don't know how close the nearby churches are. When I do get ahold of a history, I'll share more information.

ST. THOMAS' CHURCH.
The largest parish school in Kansas is that of the St. Thomas parish in Kansas City, Kansas, at No. 626 Pyle street. With one of the very best of school buildings under the direction of the Rev. A. W. Jennings, with nine Sisters of St. Joseph as teachers, the school now has an enrollment of more than five hundred pupils, teaching complete grammar and commercial courses.
The organization of the St. Thomas parish was effected in 1881. The Right Reverend Thomas C. Moore, who was administrator of the diocese of Leavenworth after the death of Bishop Pink, but at that time director from Covington, Kentucky. was the first rector. A two story building which he erected was used for church and school purposes. There were but sixteen Catholic families in the parish at that time.
Father Moore was succeeded by the Rev. John Lee, who was rector until 1895, when he was succeeded by the Very Rev. John Ward of the cathedral at Leavenworth, who is now bishop of the diocese. Under Father Lee the church grew and flourished, and it was during his pastorate that the Sisters of St. Joseph were introduced as teachers in the parish school. Father Lee built the convent for the use of the sisters, the priests' house and the basement for a fine church, which later was roofed over and used for church purposes until the flood of 1903, which carried away the roof. Church services have since been held in the auditorium of the parish school building.
The Rev. A. W. Jennings took charge of St. Thomas' parish in 1900 and is the present rector. In 1902 he began the erection of the present fine school building, which cost about $25,000 and is both model and modern in every way. It was first occupied in January, 1903. During the spring of that year came the great flood, completely covering the basement chapel and rising to the second floor of the residence, school and convent. But Father Jennings was not discouraged. He bravely stayed at his post, and already the parish has recovered from the catastrophe. The school is larger than ever, and about two hundred and seventy-five families are again numbered in the membership of the parish
Posted by Curmudgeon at 11:12 PM

St. Thomas was closed before the Spanish influx. It was damaged in the flood and the parishoners were sent to St. Benedicts which is about 8 blocks away. It did reopen but not to a big population. St. John the Divine and St. John the Evangelist were the two Spanish churches which were very close. When St. John the Divine was closed it was sold to El Centro. It had been Fr. Burger's home parish so many of the items were placed in Holy Trinity in Lenexa where he was pastor at the time.

Wow, anonymous. You're just the fellow (or the lady) I need on this project. Do you know where St. John the Divine and St. John the Evangelist are?

To add to the above post, Holy Trinity in Lenexa has the bell from St. Thomas' bell tower and two beautiful stained glass windows which are used in the interior of Holy Trinity, by the confessional. They are worth a look. I think it is great when a new parish makes use of some of the "relics" from the old parishes as they close.

Church of the Nativity in Leawood, for example, has a beautiful cereboam (sp?) which was a gift from Fr. Ray Davern (a wonderful man, recently passed) while at St. Anthony's parish. It is used for Thursday adoration. It speaks to the continuity of the "communion of saints" to think that more than several generations have revered the Sacrament through this beautiful instrument. The journey of those German immigrants who sacrificed to build beautiful St. Anthony's parish continues on in a place they could never have imagined.

Too bad more of the items of older and closed parishes are not widely used in the new parishes. Or maybe some of them are and we just don't know the story.

Sorry--I should have St. Anthony's donated a monstrance, instead of cereboam. It is quite beautiful.

St. Thomas is not located in Argentine. It's in Armourdale, a distinct neighborhood with its own history and identity. The original congregation was mostly Irish-Catholic.

St. Thomas was only closed temporarily due to the 1951 Flood. Until then, the Archdiocese operated a Mexican-American parish called Mt. Carmel (at Pyle & Shawnee, now the site of a warehouse). Mt. Carmel was closed after the flood, and Spanish language masses were relocated to St. Thomas, where they were observed regularly until it closed. The parish school was closed in the late 1960s. The parish itself closed in 1989. The congregation was combined with St. Joseph-St. Benedict. While the bell and windows were removed, most of the interior is intact and is used regularly by Crosslines.

St. John the Divine is located at 25th and Metropolitan in Argentine. It also closed in the late 1980s. St. John the Evangelist is also in Argentine, at 29th and Strong Ave., just a few blocks away. It was consolidated with Sacred Heart church some time ago and is now known as Our Lady of Unity. It is still a very active parish. Both were closed temporarily by the 1951 Flood, but were restored and reopened shortly thereafter.

Can anyone direct me to where the records of Catholic families from the early St Thomas church era can be located. I am a descendant of the Buckman family that grew up in Armourdale and were parishoners at St Thomas. They also ran a grecery store there. I'm looking for baptismal, marriage, and death records in my quest to put our family genealogy together. Thanks for any help! Mr B.

I would start with the historian at the Kansas City KS archdiocesan office. What records were not ruined in the 1951 flood are there. Also, my family (Irish Catholic as one of the posters on this site mentioned the original St. Thomas members were) is from the area and there are still a few older people around who may remember your family, depending on how far back you are going. However, I am reluctant to leave my email or names of these others on a public website. Not sure how I would get in touch with you. Perhaps Mr. Crumudgeon has a suggestion for how we could do so. I haven't looked at this site in many many months but will attempt to remember to do so in case you leave a message.

The National Trust for Historic Preservation has posted an online profile of St. John the Divine in Argentine and Mount Carmel in Armourdale:

I found this site because I was trying to find my baptismal records. I was baptized at St. Thomas in 1959. My family lived at 720 S. Pyle, just down the street. When we left in 1964, my grandma moved in. I continued to visit her on weekends and in the summer, and we always went to Mass at St. Thomas. I remember it was always hot in there as they had no a/c (just fans in the windows). When I was about five, I used to stare at the light blue dome above the altar, and imagine that was the way to heaven. Fond memories of time spent in Armourdale.

The baptismal records for St. Thomas the apostle can be found at All Saints on Vermont in KCK. They don't have any death records. They do have some marriage records.

I just found a baptism certificate for myself from 1961, St. Thomas Catholic Church in KCK. Surprised that I don’t remember this church at all though I did go to school at St. Joseph and St. Benedict’s. Glad to find this blog and posts (dated as it is) for some information.