Hey Lady, that ain't a breadbox you just walked by!

So I'm in St. Louis earlier this week and I find myself across the street from the Old Cathedral with a half-hour to myself. A nice opportunity to go spend some time in front of the Blessed Sacrament in the same church from which Fr. DeSmet and countless other Catholic missionaries departed to bring the Faith to the American West. 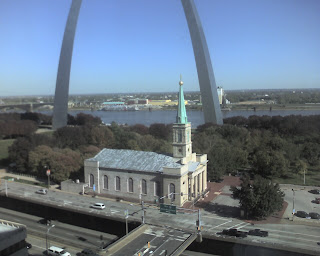 So I slip over there.

I tug on the door, and it's open. And I'm pleased to see that there's some semblance of order and tradition in the arrangement of the place. Some goofy stuff here and there (the ambo, for instance), but still an altar rail, and a central tabernacle, and a raised altar on which a traditional Mass could be celebrated...still obviously Catholic.


And so I'm rather settled in before the Real Presence there, and I'm midway through the mystery of the Presentation when this older, heavy-set woman in a sleeveless shirt comes wandering out of the sacristy, across the sanctuary, and kicks herself over the velvet rope spanning the central gap in the altar rail. She comes down to me and tells me (with maybe slightly more regard as she just showed our Lord in the Blessed Sacrament) that I'll have to go; she's locking up. I watched her waddle back to the Church and hold the door open waiting on me to leave (again with nary a glance at the tabernacle).


Somehow I bit my tongue, but now I wished I wouldn't have. HEY LADY, THAT AIN'T A BREADBOX YOU JUST WALKED BY, that's the Creator and the Saviour of the World, Who humbled Himself to become a creature. And you can't even humble yourself acknowledge His presence with even so much as a novus-ordo nod to the tabernacle?

Or perhaps, despite the burning sanctuary lamp, He wasn't there at all? Maybe she knows something I don't about the way the sacraments are "celebrated" there? If so, at least she didn't give Him any offense, and it really was just a fancy breadbox.


Argh. Once again I'm reminded of the state of the rest of the Church. God bless Archbishop Burke for trying to restore the Faith in St. Louis, but what regard can people have for the Church when they have no regard for her Founder? Especially people who apparently have some role to play in the upkeep of a holy place that's been designated Bascilica?

I'm not sure I could ever go back in the Old Cathedral now. Next time I'll find a full hour and drive down to St. Francis de Sales.
Posted by Curmudgeon at 11:32 PM 5 comments:

Carnahan's Still on the Devil's Payroll

Ah, yes...we remember way back to the year 2006, when Robin Carnahan, Satan's apprentice in the Missouri Secretary of State's office, did her part to further the culture of death by assuring that the people of Missouri got a misleading ballot summary of Amendment 2, the Clone-n-Kill initiative. She managed to fool enough people so that (although the initiative's support declined week

after week as people learned the truth in the runup to the election) just enough people pulled the lever in Missouri to make sure our own little Island of Dr. Moreau could stay in business. Of course, she did have a little help, to the tune of $30 million from baby-killin' billionaire Jim Stowers. But she did her part by making sure that Missouri voters couldn't tell that the state was redefining "cloning" to mean something that it did not.

And now we fast-forward to the fall of 2007, to learn that Robin's being even more bold. She's taken THIS and written ballot language describing it as a proposal "to repeal the current ban on human cloning or attempted cloning."

OFFICIAL BALLOT TITLE AS CERTIFIED BY SECRETARY OF STATE

Shall the Missouri Constitution be amended to repeal the current ban on human cloning or attempted cloning and to limit Missouri patients’ access to stem cell research, therapies and cures approved by voters in November 2006 by:

Of course she'll get away with it. The Missouri courts earned their thirty pieces of silver last time and made sure the challenge to present the proposal fairly and honestly was quashed. And there's no reason to think they won't oblige again.

At this point the Enemy and his instruments are so drunk with his own success, and has gained so much confidence, that they're not even trying to cover their movements anymore.
Posted by Curmudgeon at 8:56 PM 2 comments:

McCarthy, the principal, said he sympathizes with those who have reservations about the program. "I think it makes people nervous to think middle school students are having sex. Frankly, it makes me nervous. But there's a small population out there that needs protection," he said.

Damned straight, they need protection. That protection could involve vigilant teacher during the day, a responsible older sibling after school, and a father at home in the evening (you know, the kind father who keeps a 12-gauge in the closet and a castrating clamp in the workshed*).

But of course, that's not the sort of protection they propose.

*actually, I guess I'm not that kind of father. The shotgun currently in my closet is only a 20 gauge, and we band our cattle. We don't have a clamp. I don't think that banding will work on male creatures who have opposable thumbs. I'll have to get the right equipment if Eldest ends up in public school.
Posted by Curmudgeon at 6:00 PM No comments:

How to be wrong when you're right...

Apparently there's a guy named Bill O'Reilly who's a big deal on some TV news channel I don't watch and on some syndicated radio show that I don't listen to. I've seen him or heard him a couple of times in passing. He's apparently a self-identified Catholic, too, who's quite eager to peddle the distortions of his own ill-formed conscience as superior to Catholic teaching. And beyond that, he's an incomparable blowhard bore.

From what I've seen, he makes Rush Limbaugh seem like Russell Kirk.*

Well, anyways, he's apparently weighed in on the homosexual infiltration of Most Holy Redeemer parish in San Francisco, where last week Archbishop Neiderauer committed sacrilege by giving the Blessed Sacrament to a couple of flamboyant sodomites who are apparently part of the "Sisters of Perpetual Indulgence." Bill is apparently outraged that these guys invaded and desecrated a Church.

What an idiot! They didn't invade! They were invited and welcomed there. As all of us who ever pay any attention to the news of the Church know, heck, they used to have functions at Most Holy Redeemer! And the Archbishop who committed the sacrilege is complicit in the promotion of their sodomite agenda.

And apparently some of the folks who got that Archbishop appointed are more than complicit in the promotion of the sodomite agenda, but that's another story.

Anyways, back at this Bill O'Reilly character. Sheesh. A big fancy network and a staff of several (if not dozens of) people, and they can't check facts? Is that all it takes to be on the TV and make a bunch of money? Heck, I can do that, and I can direct the outrage where it truly belongs.

In the meantime, I'll just go back to my book about Fr. DeSmet.

*For those of you who don't know, Russell Kirk was the thoughtful, exceptionally well-read man who deserves the most credit for starting the modern conservative movement....back when there was still something worth conserving.
Posted by Curmudgeon at 8:49 PM 3 comments:

Mrs. Curmudgeon does keep up with going's on in the devil's playground of Lawrence and regularly looks at the Lawrence Urinal World.

And yesterday, she read a story about something she'd like to try, noodlin'.

Frankly, if my family were starving, I'd give it a try, as part of my paternal duty.

But otherwise, forget it.

I'll just get my Lawrence repast as Joes Bakery. Mmm. Hot Glazed NOW. Or then again, maybe I won't.

Seriously, though, for the cracks one makes about the Lawrence paper, I guess you've got to compare it to the Kansas City Star. Sure, Dolph's little paper is wrong more than it's right, but it's at least more readable than the Star. The well-written noodlin' article is a case in point. Just try to find tight, clever writing like that in the Star. And the news is actually meaningful. Knowing that Joe's Bakery is closed down is far more useful than any of the crap they put in the Star FYI section. Now I know to head straight for Munchers (which, frankly, I was inclined to do anyways. The cream cheese doughnut at Munchers beats even the hottest, fresh-from-the-oil glazed at Joes).
Posted by Curmudgeon at 9:49 PM No comments:

The most evident mark of God's anger

The most evident mark of God's anger and the most terrible castigation He can inflict upon the world are manifested when He permits His people to fall into the hands of clergy who are priests more in name than in deed, priests who practice the cruelty of ravening wolves rather than the charity and affection of devoted shepherds. Instead of nourishing those committed to their care, they rend and devour them brutally. Instead of leading their people to God, they drag Christian souls into hell in their train. Instead of being the salt of the earth and the light of the world, they are its innocuous poison and its murky darkness....

Oh, little more except this, from Diogenes at the CWNews blog, quoting Bp. Soto:

Chris Andersen's present difficulties pain me very much not only because he is a friend but also because he is an associate in the ministry. Our works brings us into intimate contact with people's lives. In a time when the exchange of simple affections within the most intimate of circles has become a rare commodity, our associations with others run the grave risk of being misunderstood by all parties including perhaps the priest himself [OTR's emphasis]. There is cause therefore to exercise prudence and right judgment while at the same time pursuing the mission of Church to bring healing and comfort. If Chris has failed in exercising such prudence or has in fact abused the privilege provided him by the people of God I would the hope the court would seek some remedial means of dealing with the case at hand as opposed to extensive incarceration.

The most evident mark of God's anger and the most terrible castigation He can inflict upon the world are manifested when He permits His people to fall into the hands of clergy who are priests more in name than in deed, priests who practice the cruelty of ravening wolves rather than the charity and affection of devoted shepherds. Instead of nourishing those committed to their care, they rend and devour them brutally. Instead of leading their people to God, they drag Christian souls into hell in their train. Instead of being the salt of the earth and the light of the world, they are its innocuous poison and its murky darkness....

How on earth can a Catholic remain in God-forsaken California? Jeff, seriously. How?