Adherents of the new religion

Thoughts from someone I know very well:

They don special vestments for their rituals.   They stand before a crowd of believers and assure us of their concern for those congregated before them and the community at large.  They tell us what they want us to believe and how we should act, with just a few generalizations and even fewer details about how they arrived at their teachings.  They tell us we must rethink our assumptions about living and our personal priorities.  They don’t stand before us to be questioned, but to pontificate.  When questioned, they invoke their own authority more often than they give us the foundational information that underlies their teaching.

When one teaching conflicts with another or has no empirical grounding, we’re told it’s a mystery (they say "model" or "theory").  The translation of their sacred texts and catechisms—their doctrine itself—can be subtly altered, and when no longer useful to them, old teachings are either ignored or explained away—even to the point that they mean the opposite of what we were told only a short while before.  When one dares to question the latest pronouncement from the pulpit, they and their true faithful stop their ears, or ostracize him for his questioning—he is a denier-heretic-schismatic-apostate!  Questioners and doubters such as he lack the proper credentials, proper screening, and due admission to the ranks of their clergy, and shall not be permitted to ask such questions!

You know where I’m going with this.  It’s not an original thought….many people, including CS Lewis, have addressed it before.  I’m not caricaturizing Christianity, or Catholicism in particular, either before or after Vatican II.  I’m writing about the Established Religion of the 21st Century, SCIENCE. 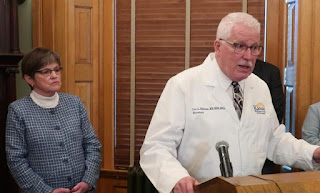 When SCIENCE is invoked in 95% of conversations (and 99% of media reports), you have to remember that the speaker is not talking about a method of understanding the natural world—a rational process of induction, deduction, hypothesizing, counter-hypothesizing, and verifying or challenging data.  The speaker invoking SCIENCE almost always refers to a religion.  It’s a religion that is jealous of its influence and centralizes power in its clergy.  It actually demands of its adherents MORE faith, and LESS personal study or personal accountability than quaint, superseded religions like orthodox, hierarchical Christianity.

Doubts and contradictions aren’t dissected and refuted; they’re mocked and shouted down, either by the clergy themselves or their acolytes (the media and politicians).

But practitioners and clergy of the religion of SCIENCE?  They either actively violate these rules, or they encourage or permit their media and political acolytes to do them.

And in doing so, they diminish (or eliminate) our respect for them.  Worse, they make it less likely that we will trust them and respond properly when “the big one” comes and we DO need to take them seriously.   Someday, we’ll probably face a very serious pandemic threat.  But at least a large minority of the population, including me, won’t take it seriously, because those who in theory we should be watching have completely unmasked themselves in the last six months.

Yes, I reject SCIENCE as a religion, but I welcome more rational inquiry based on the scientific method.

Posted by Curmudgeon at 2:26 PM No comments: