"Today, Lutherans and Catholics have come to acknowledge that more unites than divides us." [Cough]

So the Curmudgeon is back?  Well, yes, for the moment.

I can't bring myself to close the blog down completely, because so many people from old KC Catholic grade schools use it as a defacto place to connect and reminisce (I guess they don't have FaceBook?)

But we've lost the Culture War.  We've lost the battle to regain the structures of the Church for the forseeable future.  So there seems little point in raising hell about everything in Western society or in the larger Church.

However, there's occasionally something more local that's worth noting, and worth raising our vocies on.  The Holy Father doesn't have to deal with you and me (or even that fellow who appears to be Pope, but we can't be 100% sure, given just the publicly-known violations of Universi Dominici Gregis surrounding his ascension).  But hey, what about closer to home?   Abp Joe Naumann in Kansas and the new forgettable Bergolian appointee who appears to have replaced Bishop Finn (but we can't be 100% sure of) in Missouri--these fellows can't stop their ears completely.

And here's a chance to be heard!  Franciscan Heresy is coming to Kansas City on Friday night.  There's a Lutheran/Catholic Celebration of the Reformation.  Abp. Joe and Bp. whats-his-name (the Sacristy card says Jacobus--that's all I remember) are going to cuddle up with some ELCA "bishop" and talk about what unites us rather than divides us.

It's not bad enough that they're Lutherans, who are going to be affirmed in the Augustinian monk-turned-heresiarch's pernicious errors regarding Justification, Scripture, and the Sacraments.  These are members of the Evangelical Lutheran Church of America.  Now if we were going to "dialogue" with Missouri Synod or Wisconsin Synod Lutherans, that might be something.  Even though they're in damnable error, we can be reasonably certain that they're Christians of a sort.   The ECLA is the home of the left-wing, new age goofballs who change scripture, celebrate sodomy, and make regular donations to National Public Radio.  They're the subsect that you join when you want to be a modern-day habitless nun, or a prancing Jesuit, but your old German grandfather will write you out of your will if you cease to be Lutheran.  They're not serious people.

But then again, who better to "dialogue" with if you're a spineless, faithless post-Vatican II bishop, huh? 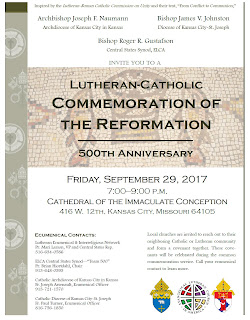 So I encourage everyone to show up and do some sidewalk counselling.  Maybe you'll instantly shake just one person out of his syncretic complacency.  Maybe you won't...you'll just piss someone off.  But hey, that's planting a seed that might grow.  And it's fun to piss off the right sort of person now and then, isn't it?

Does anyone have a 2-page to 8-page tract explaining why the so-called "Reformation" shouldn't be celebrated?  It would be great to hand it out to people as they came down the sidewalk.   If so, email me, and I'll pay to print a few hundred copies if it's well done.

Oh, and as for me, I'd be there, but I just found out about this, and it's archery whitetail season in Kansas, and I've already made a solemn promise to take the eldest of the little Curmudgeons out.  I'm not going to let Abp. Naumann's evil mess up my family commitments.  The eldest Curmudgeon will be a factor in my life for a lot longer than the Archbishop (or at least I hope so), so I must keep faith with her.

If you can't go, but you want to call and ask some hard questions of the organizers, here are your (Catholic) contacts: