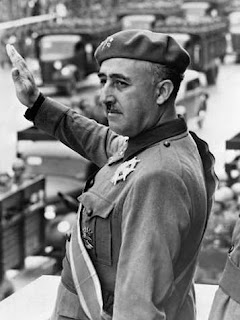 The ruling party, which is well into its campaign of subtle persecution of faithful Spaniards and Holy Mother Church, has passed a law condemning Francisco Franco.

Ah, it's hard to remember that God knows why he put me here, now, instead of among the Carlists of Spain in 1936. Oh, to have such a noble cause, and to have contributed to its success! Well, I guess if He'd have also had to have given me a better facility in Spanish (worst grades in elementary school) and make me a better shot, too. But to think I might have been there and gotten a shot off at commie Ernest Hemmingway!!!
Posted by Curmudgeon at 9:14 PM 5 comments: