One of my friends, for whom I've invented the moniker "Kumbaya," has a guest post which I'm happy to put up:

WASHINGTON D.C. (Associate Spoof) -- Nevermind the "real" summer games going on in Beijing; there's a far more interesting set of games going on here in the states: The USCCB Summer Games. Just in case you've never heard of these games, here's a rundown of the most popular events.

Starting with a test of speed, stamina, and strength, the games open with the ICEL Translations Criticism Contest. In short, the contestants vie to see who can complain the loudest, the fastest, and the longest about the translations of the newly proposed liturgical texts. This year's competition looks to be especially interesting as the perennial favorites have been stewing over Cardinal Arinze and Archbishop Ranjith's recent exhortation to toe the line and follow the translations as rendered by ICEL. Cardinal Mahoney is favored to win as long as he's not disqualified for false starts.

Verbal dexterity, creative obfuscation, and use of the diocese legal team will be pushed to the limit in the Abuse Lawsuit Obstacle Course. With the retirement of defending gold medalist Cardinal Law, the field is wide open this year. Speculation among some insiders is that Bishop Brom of San Diego might have an edge but the field is packed with many highly qualified contestants. A record number of requests for press passes have been received for this event.
In the non-clerical events, competition for the gold will be the tight in the Liturgical Dance Competition and the Greet Your Neighbor and Exchange the Sign of Peace individual medlies. Assuming enough traditionalists can be duped into being "catchers," the Javelin Throw should be a real crowd-pleaser at the Olympic Coliseum, as well as the Pick Your Dogmas Archery Contest (which, as in previous years, is only open to "dissenting Catholics").

Two new events have been added to the field thanks to last summer's publication of Summorum Pontificum. The first is Team Weight Lifting, a timed event in which contestants reconfigure a sanctuary from Novus Ordo mode to Tridentine mode and then back again. Also new to this year's games is the Red Tape Relay in which Catholics file requests for a traditional Latin Mass with their local bishop while raising a non-refundable 25% down payment to finance the operations of a part-time community which will be serviced by a bi-ritual priest -- all while preparing an appeal to the Ecclesia Dei Commission in case the request is denied.
Sadly, not all of the planned events will be taking place in this summer's contest. One of casualties was The 100-Annulment Sprint which was nixed when all but two of the contestants were dismissed for "rubber stamping" during the qualification round. Also canceled was the Spirit of Vatican II Road Race because nobody could agree where the race started, where it finished, what path the course was supposed to follow, or who was allowed to take part in the event.

Expect security to be tight at this year's games, as well as possible gender-checks for female contestants attempting to infiltrate the all-male events. Check your local diocesan newspaper for complete coverage.
Posted by Curmudgeon at 10:18 PM 3 comments:

Updated the Boston Church Closing post below with pictures. Finally got them uploaded.
Posted by Curmudgeon at 10:27 PM No comments:

Happy to be back in Kansas, and out of new Sodom, I pulled in to the parking lot at Blessed Sacrament in Kansas City for 11am High Mass, thinking it was great to be back in God's country.

.....The deacon who taught my confirmation class in Texas warned me about it..... 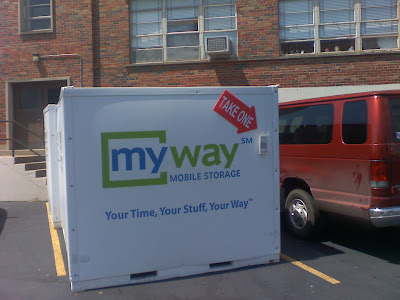 I often wonder about what goes on at Blessed Sacrament when we're not there.

The comment box is open.
Posted by Curmudgeon at 6:33 PM 5 comments:

First of all, madam, I think you should start your own blog, if you haven't already. You're much more amusing than I am. Mrs. Curmudgeon thought "Pandas Revealed" far superior to any of my witticisms.

Secondly, a "personal parish" is as follows:

Can 518 (1983 Code of Canon Law): As a general rule a prish is to be territorial, that is, one which includes all the Christian faithful of a certian territory. When it is expedient, however, personal parishes are to be established determined by reason of the rite, language, or nationality of the Christian failthful of some territory, or evn for some other reason.

A parish is a juridic person with some rights (however precarious under the new regime). Many places (e.g., Denver, Rockford, Sacramento, Kansas City Missouri) have traditional communities which are established as personal parishes or their equivalents. Others (e.g., our little group) are mere "chaplaincies," with no rights, but which exist only at the sufferance of the ordinary. That's not to say there aren't risks to personal parishes (see Scranton PA), but they're not entirely a plaything of the chancery as St. Rose Philippine is.
Posted by Curmudgeon at 8:03 AM 1 comment:

Springtime of Vatican II in Boston

I'm on a business trip, and I had a few hours free last night and found myself in Boston's Chinatown, so I went by and took a few pictures of recently-closed Holy Trinity, a symbol of the wise episcopal governance and collegial papal deference that Boston has enjoyed over the last forty years. 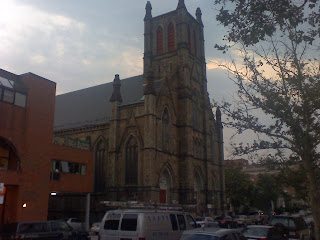 How wonderful the aggiornamento has been! This is the traditional Latin Mass community met for a number of years, and it's my understanding that they were quite prepared to take over responsibility for the historic church(which, judging from the exterior, could stand a little work). 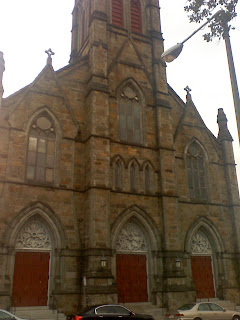 Of course, to allow those traditional folks to have their own place would have been unthinkable; they're not really a part of the larger Church, you know. And besides, Cardinal Sean might be able to make a few thousand dollars to throw at the buggery bill by selling it to some goofy New Agers who would....ironically....have a beautiful place to celebrate gay weddin's. 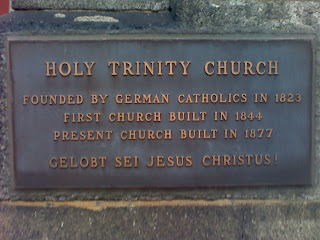 It was the announcement from the Diocese of Scranton, home of the North American FSSP headquarters, that the FSSP-served traditional personal parish be supressed or merged with a happy-clappy parish "to cope with the priest shortage" when the FSSP is probably the only institute in that diocese that actually produces plenty of religious vocations? I figured, having read that, that I'd venture a little bit and see the wreckage in Boston.

Isn't it something, how incredibly stupid we all are, in the eyes of the evil or incompetent men who've politicked their way into being our shepherds, and in the eyes of their crooked chancery rat handlers? And isn't it something, the money that can be made out of church closings when you team the chancery rats up with guys like Alan Meitler? Church closin' is good business, and business has been good in Boston, and Scranton, as it has been in the Archdiocese of Kansas City, Kansas.

It is only out of the profound love I have of Mrs. Curmudgeon that I've donned socks.
Posted by Curmudgeon at 6:04 PM No comments: