I guess it really isn't just a rumor....

Let's pray that my fears from last night are unfounded!
Posted by Curmudgeon at 8:52 AM 1 comment:

Worse off than before...?

Having been on the farthest fringes of the Catholic news loop for some time, Mrs. Curmudgeon was the one who pointed me to the news that the Vatican had released the motu proprio to representatives of the various episcopal conferences. Rorate Caeli has the details; no point in pretending that I'm telling anyone any thing they don't already know.

But of course, there are two points which weren't, perhaps, emphasized enough on that site and in the comments that followed. They bear out a concern I've had for the last couple of years that under the guise of preserving Tradition, the Vatican apparatchiks will destroy it.

The froggie liberal Catholic paper La Croix reports, among other things, that (per Rorate Caeli's translation):

Well, if the La Croix report is true, in a few weeks, the Vatican will find itself farther than it has been in years from any sort of reconciliation with the SSPX or other "irregulars." And the SSPX and other irregulars with find themselves with an influx of now-indulterous priests and laity who recognize this "liberalization" for what it really is...a wolf in sheep's clothing (in fact, not very convincing sheep's clothing). Nothing has been liberalized; the Ecclesia Dei regime will continue, but with the new burden of substituting the ridiculous, pointless calendar novation imposed by Pope Paul for no other purpose than to break with tradition, and with the awful Pauline lectionary that destroys the wonderful annual cycle that (even after just a few years) I so look forward to.

And I'm sure that the distance will be just fine for many of the wicked men in Rome and various chanceries about the world who are eager to drive the last vestiges of the Church out of their little modernist organization. Anyone who's not asleep can recognize that any changes to the preconciliar Missal right now will be identified by traditionalists as an attempt to co-opt and divert. If there's to be any hope of healing any wounds in the church, that healing certainly won't come if there's tinkering with the Tridentine rite. The Tridentine rite must remain static in order to survive within the formal boundaries of the Church. The Wuerls and Ricards and (closer to home) Liebrechts of the world will certainly cheer this motu proprio, if La Croix is right, because it very well could cause the movement to regularlize the old rite to splinter, and it will leave them free of the last remnant of tradition so they can continue their Barney Masses and their Clown Masses and their Young-Halfdressed-Hottie-Liturgical-Dancer Masses without that embarrassing reminder of how it used to be, when we worshipped the Almighty instead of ourselves.

The only hope we have is that, in fact, La Croix is simply assisting the froggie bishops in a last ditch effort to sabotage this project. Will the Vatican screw this up? Hmm. I'm hoping they don't, of course, but there's a good four or five decade-long history of the Vatican screwing things like this up, isn't there?

But if it's not sabotage, and the Vatican is determined to screw this up, then the Curmudgeons (and others) will have a decision to make. Are we willing to participate in the final destruction of the old rite? Are we willing to go along the latest fabricated, on-the-spot, half-assed nonsense? And are we willing to listen to the see-Spot-run banal translations that the wretched ICEL and USCCB have imposed on everyone else every Sunday?

Hmm. My preliminary answer to that question will certainly disturb some of my indulterous clergy and lay friends. Let's just hope the question isn't asked.
Posted by Curmudgeon at 9:49 PM No comments:

As for the last couple of months, I've got all kinds of excuses:
Been busy. Lost my password for the new blogger for a while, and had trouble logging on to the old computer. We finally sold the old Cave, and moved to temporary lodgings while we search for a new one, so I've been carting boxes. Didn't have a place to set up the old desktop (which was really cranky anyways) so it wasn't convenient to blog until recently, when we got the laptop. Employment circumstances have changed (for the better), and commute has extended, so haven't had so much lazy time at home to blog, or to surf the internet and find things to get mad and blog about. I've also been traveling some. I've been waiting for the motu proprio and our liberation. I've been reading real, printed books.
I could go on--I've got plenty more excuses where that one came from.
But I won't.
I just want folks to know that I'm still out there, and I still have the best of intentions about returning to the blog.
In the meantime, enjoy a lousy camera phone picture of a beautiful sanctuary. 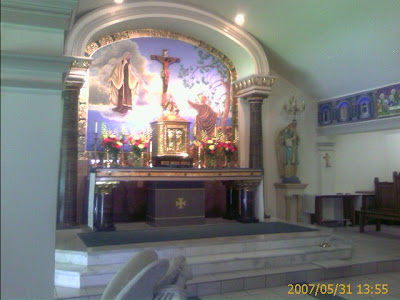 I was in the Denver area on business a while back and had an opportunity to stop by the Our Lady of Mount Carmel Community, the FSSP apostolate in Littleton, Colorado. Another great story, alongside that of St. Stephen Protomartyr in Sacramento: the indulters in Denver, unobstructed by (although still hassled by) modernist chancery rats or an indecisive archbishop, located a suitable facility built by a Protestant sect that had contracepted itself out of existence, and turned it into something beautiful (too small, of course, but beautiful). 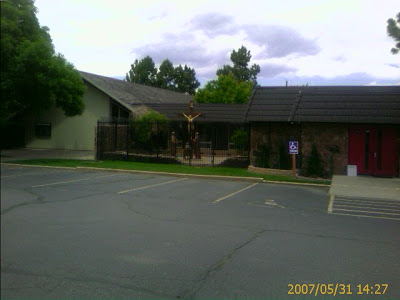 I knocked on the door and met a few really nice folks who showed me the church, and we had a nice visit. I learned that OLMC is, only a few years after starting their project, debt free with quality facilities (too small, of course, and not as beautiful as something built by our great granparents before the modernists destroyed ecclesiastical architecture in the 1940s, but quality).
And it's all theirs! No working around the novus ordo table in the middle of the sanctuary for them. No clearing out early so the rappers can come in and profane the sanctuary with their "music" for them. No scrambling to figure out what to do with the liturgical gear between Masses for them. What a joy it must be to be able to live a normal Catholic parish life, instead of being a tenants at a dying novus ordo parish, and getting short shrift from the chancery rats who are only interested in our money!
Posted by Curmudgeon at 10:22 PM 3 comments: