Word comes to us that Msgr. Heliodore Mejak, for over 63 years the pastor at Holy Family Parish in KCK, passed away on Christmas Day.

Msgr. Mejak was reported to be the longest-serving pastor in the world, and only the SECOND pastor to serve in the parish since its formation in the 1920s.


O God, Who wast pleased to raise Heliodore, Thy servant, to the dignity of the priesthood: vouchsafe to number him with They bishops and priests for evermore.


Msgr. Mejak was always friendly to traddies, and was a calm port in the ecclesiastical storm of the 1970s for many in Kansas City.


No details on funeral arrangements.
Posted by Curmudgeon at 8:31 PM 3 comments:

Well, I'll wish you the same devious, intolerant, insensitive greetings I've been wishing everyone, including my Jewish friends, all week:

Merry Christmas, and a Blessed New Year!
Posted by Curmudgeon at 1:59 AM 1 comment:

Well, while we're gratified to see some young women's communities organizing and growing and bringing new Graces into Holy Mother Church, we're not surprised how little some of the older communities, flush with the spirit of Vatican II, have left to contribute:

Nuns leave their brains to science

Seriously, perhaps the neurologists studying those brains can find the "spirit of Vatican II" switch and come up with a way to turn it off before their whole orders disappear.
Posted by Curmudgeon at 3:16 PM 1 comment:

The answer to the problem, of course is to unwind the masonic revolution that has brough Italy great miseries and small ones over the last 130 years, and to restore the Papal States.
Posted by Curmudgeon at 10:49 PM 2 comments:

A nugget from Frank Sheed.

Nope, I' m still not really blogging again; too much real life, and too much reading to do.

But the reading is much more rewarding. Finally getting through Frank J. Sheed's Society and Sanity (1953), which I've had for over a year and just hadn't gotten through.

Here's a nuggest from pp. 181-82, which my prottie and flag-wavin' Neo-Catholic friends need to digest:

At the moment the sky is filled with the clang of battle between Totalitarianism and Democracy. In fact, there is no opposition between them. They are answers to two different questions.

Totalitarianism is an answer to the question, "What things are Ceasar's?"--the answer it gives being that all things whatsoever are Caesar's, that the State's right of control is unlimited, that the citizen has no rights against the State, no part of life that is simply his own.

Democracy is an answer to the question "Who is Caesar?"--the answer it gives being that Caesar is whomever the People elects.

Obviously there is no necessary opposition between them. One State might easily give both answers. It might decide that authority resides in the People, and that the People elects its government and can change its goverment. And it might also decide that there is no limit to the People's control, throught that elected and dismissible goverment, over the life of the individual, that, for what is conceived to be the good 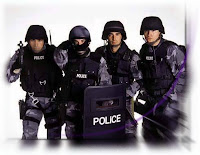 of the totality, the individualmay be totally regimented. There is no paradox here, no improbability even. A government which can claim to be doing what the majority of the people think best can interfere in the life of citizens as the most absolute tyrant could not: it was not an autocrat who in this century imposed Prohibition upon a great people: no autocrat would have dared. In fact control by government is spreading so fast in the democracies that the distinction already noted between the two main times of social authority has less meaning that of old, and Caesar is as good a symbol for one as the other.

Yes, one very clear explication that supports my view that I'd rather live under an autocrat like Franco that the current Spanish democracy, of for that matter, the current U.S. democracy. God bless Franco.

A friend from Montana has repeatedly recommended this book, and it's wonderful. A shame it's not in print, and you can count on Sheed & Ward, Frank's own publishing house, now run by leftists, be be sure it stays out of print.
Posted by Curmudgeon at 5:41 PM 7 comments: