Look what I found!

A year or two ago, when the Boy Scouts of America made its first capitulation with regards to sodomy in the ranks, I thought it was time to get rid of my little trinkets. But I was too busy to dig through my boyhood boxes for them at the time. However, the most recent capitulation for sodomy in leadership happened to coincide with a thorough cleaning of our storeroom, and I came across it timely: 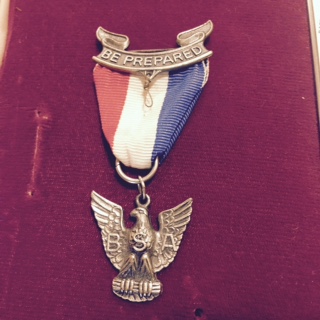 Because I see no reason to wait until the BSA's final capitulation (that's the one where "morally straight" is taken out of the oath because it is homophobic, and all troops are required to accept sodomites), I packed it up today, with this letter:

Mr. Brock,
Please find enclosed the Eagle Scout medal and certificate that I earned in 1984.  I am also returning my Ad Altare Dei emblem, because it would seem rather a farce to keep a religious medal earned in the BSA at this point.

I have been concerned for some time as the BSA has drifted along the wave of political correctness and replaced its traditional values with modern ones, just as the Girl Scouts had done in the 1980s and 1990s.  A couple of years ago, I declined to enroll my own boys in a local troop, because I was uncomfortable with the alterations in the BSA’s orientation since my own boyhood, and I feared that BSA was about to go through more disturbing changes.  Sadly, the organization’s two recent capitulations regarding homosexuals have validated those concerns.

Your organization has fallen into the hands of cowardly or corrupt men (or men who are both).  I no longer wish to be associated with it, nor do I have any use for its trinkets.   If you keep a central registry of Eagle Scouts, do my strike name from it (earned in Troop 88, Llano Estacado Council, Amarillo, Texas, June 20, 1984, #562).  If I’m still on the rolls of the National Eagle Scout Association, do strike my name from that list as well.  They say “once an Eagle Scout, always an Eagle Scout.”  It will not be so in my case.

I feel fairly certain that Lord Baden-Powell, despite his own Victorian tendency towards the political correctness of his day, would condemn the BSA more strongly than I do. 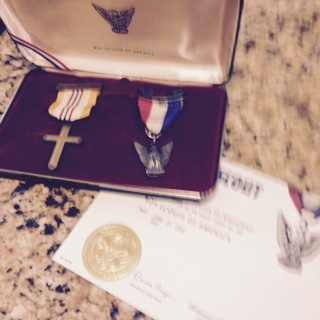 May God bless Father Lockwood for speaking out, and may God have mercy on Archbishop Naumann, who (as he has done with a few of his own good priests in the Kansas diocese) failed to back him up, and failed to even keep silent.
Posted by Curmudgeon at 12:57 PM 2 comments:

Bishop Finn: He missed his chance to be the next Becket

You have to look pretty hard to find a Catholic that supports Bishop Finn. Why? Because powerful people in Kansas City have manipulated the media to paint a good man into a demon. The narrative they constructed has been loud and constant, and these powerful people even managed to get a court to go along with them. Great tactics. Worthy of Lenin, Goebbels, Alinsky or the other master propagandists of the 20th century. But while volume, repetition, and a show trial may sway the uninformed, they do not make something false into something true.
For the uninformed (and there are many of them out there who might find this post) Bishop Finn was an activist against pornography, personally devout, and committed to cleaning up the terrible mess Boland and his predecessors left here. He appointed faithful Catholics to key positions...not dissidents who subscribe to the National Catholic Reporter. He recruited and ordained a couple dozen priests who are more likely than the last generation to teach what the Church has always taught (with dozens more in the seminary pipeline) . And in the case of Ratigan (BTW, ordained by Boland, a Bishop fondly remembered by those who orchestrated this shambles), Finn acted prudently: removed him from parish work immediately, did a legal check to to see if it was an obligatory reporting situation (which he was told it wasn't), and restricted his activities. Then the diocese investigated further when Ratigan caused more trouble (he broke his restrictions..he didn't actually do anything that resulted in a third party complaint to the diocese). Then something reportable turned up, and guess what happened? FINN HAD HIM REPORTED.
But of course the truth doesn't matter to those who are serving the Father of Lies.
Alas, Finn was politically naive and he was (unwisely) hesitant to fight back. It is lamentable that he agreed to plead guilty personally, thinking he would protect the Church and diffuse the situation. Of course it made it worse, and no doubt, he gave up the right to defend himself and speak the truth as part of his plea agreement.  Now all you hear it "convicted, convicted, convicted" in the media. No MSM mention of the real facts, much less the plea bargain and the reasons for it. It's absolute calumny. His REAL mistakes were not treating his enemies, and the enemies of the Church, as what they were, and not boldly calling all Catholics to aggressively fight back against the persecution that is underway against the Church.   Bishop Finn should have reread the life of St. Thomas a Becket as this all started.  Then maybe he would have been inspired to stand firm and face his henchmen instead of compromising.  As it happened, the Kansas City chancery will never become a place of pilgrimage like Canterbury was.
Well the lefties have the upper hand now, but they're graying and they're sterile. They have no succession plan. On the other hand, Finn left a legacy that just may eventually overcome them...probably 40 or 50 young, orthodox priests who (more likely than not) teach what the Church has always taught (or most of it) instead of some warmed over self-indulgent pseudo-theology from the 1960s.. And he invigorated and inspired the faithful Catholic laymen in their enclaves in this diocese. The clock is ticking and the enemies of the Church (as well as those unfortunate folks in the cultural proletariat who took the progressive bait) are going to die off with no one to replace them (they contracept, and the few kids they do have won't make any pretense of being Catholic). Meanwhile, the faithful Catholics who supported Finn are steadfast, and their many, many children being raised in the Church and will be steadfast, too. Eventually demographics just may give those faithful Catholics the inevitable victory (unless our Lord gets fed up with us all and sends an asteroid our way (Rev 8:10).
All that I didn't even get in a jab about "humble" Francis, the Pope of "Mercy" who appoints a real creep as a Bishop in Chile even as he blows things up in Kansas City.  You can bet things would have turned out very differently if Cupich were in Finns position, eh?

...about a lot of things.  Among them....right now I'm confused about Abp Chaput and Pope Francis.

Francis says (according to translations of his little talks with his favorite atheist journalist) that there is no hell...that souls of the "damned" are simply annihilated (not immortal?).

Chaput says that those who don't help the poor go to hell.

They can't both be right, can they?
Posted by Curmudgeon at 1:41 PM 1 comment: