We now, finally, cross the state line, and the canonical frontier, into the Diocese of Kansas City in Kansas. It may be hard to believe it possible for me to be more ill-informed, but I have even less information about churches in Kansas than I do about Missouri churches (at this point, I know of no published history for the diocese as a whole, but I may call the KCKS chancery office and the rectories of selected parishes at some juncture to see what they have). Right now, I know of only three supressed parishes on the Kansas side--St. Thomas, St. Mary's, and Our Lady of Something-or-Other, now combined with St. Rose of Lima--and I know the location of only the first two of these, so please feed me information on these or other closed churches if you have it.

What we'll do, in addition to visiting St. Mary's and St. Thomas's, is take a peek at some of the other still-open parishes around town. This should be fun, and won't require a lot of miles in the Curmudgeon car, because Kansas City, Kansas was at one time very compact and predominantly Catholic, so there's an old, interesting neighborhood Church every few blocks. As immigrants came from central and eastern Europe to work in the stockyards, trainyards, packing plants, distilleries and factories that filled the "West Bottoms" 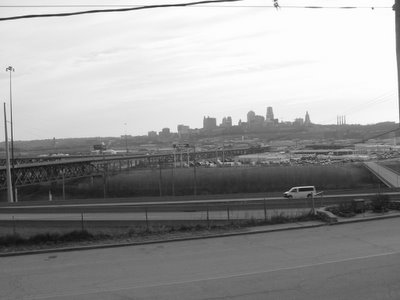 area at the confluence of the Kaw (Kansas) and the Missouri Rivers (the bottoms being pictured here from the steps of St. John the Baptist, looking east into Missouri), they all established their own neighborhoods in Kansas (the well-to-do, mostly Prot bosses lived on the bluffs overlooking the bottoms from the east, in Kansas City Missouri (many near where the shamefully wrecknovated Cathedral of the Immaculate Conception is located), while the immigrants lived cheap on the Kansas side in tiny houses, on tiny lots, in very linguistically- and culturally- segregated neighborhoods.

The Croats had their own parish, St. John the Baptist, the Slovenians had theirs, and so did the Czechs and the Poles and the Lithuanians and the Germans and the Russians 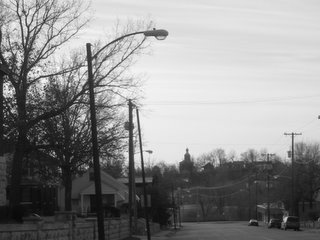 (the Russians, of course, having their own schismatic church, complete with an onion dome, as pictured in the distance here, from the steps of Holy Family).

We'll check Mass schedules and try to get inside and snap a shot of the high altars (most of them are intact) and a few details of the Catholic churches, such as dedication plaques and captions for stations of the cross written in various western languages I cannot identify, much less understand. We'll also invite another cantakerous soul I know to join the blog as a contributor, at least for a time, so he can share his collection of interior photographs (taken on a tour a few years ago), among other things.

It will be fun (or so I hope--it would be more fun if we had someone along who could provide insightful commentary instead of just "Oooh, look at this!").

Posted by Curmudgeon at 7:11 AM

There is a published history of the KCKS side parishes. I've seen it before, but I don't remember the title or anything like that. I am pretty sure it was done for an anniversary of some kind, probably the anniversary of the arch/diocese.

Make that all of the Archdiocese in Kansas City of Kansas, not just the KCKS parishes.

I have a thin volume (128 pages) my wife picked up at a thrift store or something. Not nearly as involved as This Far By Faith, but it does have about a dozen titles in the bibliography. Drop a line if other searches are unsuccessful. I can arrange to drop it off at a secure but anonymous location, if you prefer.

Hello, do you happen to know the name of the Russian Orthodox church you have pictured there? I believe it's on 6th and Lowell and I'm just curious about it's history. It makes sense that the Russians would have lived near the Czechs, Poles, Lithuanians and Germans.