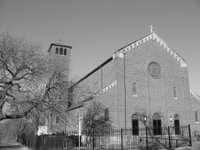 St. Augustine's church was built in 1948 in what must have then been the countryside (79th and the Paseo). As you can tell, it's built on a big scale, and it's a far cry better (inside and out) than anything built in the diocese after that date, but it lacks the attention to detail that make so many of the churches we've looked at so beautiful, and it's not just that ominous minimalism from the decades before the Council--there's 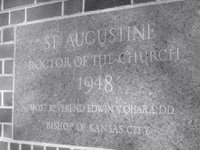 something a little off about the proportions as well. The windows in the clerestory just seem too small and too few, even for a modern church in the romanesque style . That being said, I'd trade it for just about anything built in Johnson County. 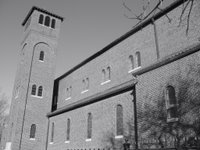 I'm sure someone whose knowledge of ecclesiastical architecture is deeper than what I got in my high school humanities course can go in to great detail about what's wrong with this church.
I could peer in and see the altarpiece in the apse. It was still intact, and very nice. It wasn't something I could get a decent photo of, through two sets of glass doors and all, so you'll have to take my word for it.

Again, I have little history here. I do know that the geographic parish was suppressed in the early 1990s, I believe; however, ithe buildings quickly found a suitable 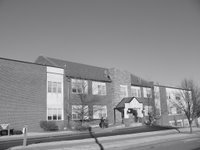 new life as the Church of the Holy Martyrs, the personal parish for Vietnamese speaking Catholics in Kansas City. The school building is now some sort of residential facility--perhaps an assisted living center?

And, with a whimper, instead of a bang, my tour of closed Kansas City, Missouri churches ends (although, you could argue that it ended yesterday because this church itself isn't really closed, right?).
Tomorrow, I'll start a new tour featuring two closed parish churches, and several ones still open, across the Kaw River in Kansas City, Kansas.
Posted by Curmudgeon at 9:52 PM

I attended preschool and kindergarten at St. Augustine's in 1983/84ish. My mother was a 5th grade teacher (I'll have to check).
My memories are vague, but I remember the playground north of the school and walking down the Paseo to St. John's Seminary for some sort of youth sport event. I remember that walk because of the lovely bridges over 77th Street on the Paseo - classic Kansas City.
Mike Jones of NFL fame (he played for the St. Louis Rams in the super bowl) went to that school and was taught by my mother. My sister was baptised there and then my mother got a job at Christ the King, so off to first grade I went. I think the School closed shortly thereafter. I have my Preschool Class Photo - I am the only non African American kid in the photo.

We moved to St. Augustines's parish in 1961 and I attend the Parish School from second through seventh grade. I remember the sister's convent being rebuilt and their presence made a difference in the lives of many. Our playground was the blacktoped grounds behind the school and the parkinglot across the street in front of the church. The older grades playground was down the Paseo one street over on a grassy lot. I was Confirmed and married in this church and my first born was baptized there.

I attended First through Eight Grades at St. Augustine. The playgrounds were behind the school and on the immediate East side. Some have since been grassed over. By the time I attended a new addition to the school East of the original structure was complete and in use.

Monsignor O'Rourke was the pastor. He passed away when I was in third grade, 1967.

Most of the parishioners moved to other churches, most notably Christ the King in the early 1990's.

My brother and I attended school there starting in First grade. My family moved during my seventh grade year. I was baptized at the church by Fr. Summer's (He became Msgr Summer's). I remember Msgr O'Rourke. My First Communion class picture included him. My mother attended school there before the school's addition. I always thought it was a grand church.

I am older than you posters. My brothers, sister and I attended St Augustine school between 1938 and 1942 before we moved closer into the city because of the gasoline rationing during WW II. The church was in a basement. No church above it. The area was called Marlborough then. I had my first communion there. We lived at 1300 East 81st.

I'm researching my 3rd great-grandfather, Eld. Martin White, and a girlfriend gave me a "Steamboats to the West" book to read that she had in her home library for her children to read (they are grown now and she is downsizing). Inside the cover was Saint Augustine's stamp plus a library card with several children's names on it, the earliest being March 22, 1968 and the latest October 27, 1971. I've transcribed those names for article on my Rush Family News genealogy blog and then got to wondering if the school was still open and decided to search for it. This blog post was nearly at the top of the search engine's list, so I came here. I will link in this post if you don't mind. By the way, I also have a biography of St. Rose Philippine Duchesne on my History Nut blog as well as a biography on William Brinkman, an architect who has designed several churches in Missouri/Kansas area. I have most of them listed.

oops! It's Henry William Brinkman. Blame it on a Brain Burp! LOL!

Hello my name is Adrienne Davis well Adrienne Kelly then I am needing help I went to St.Augustine in 1981-1983 & needing info on fellow classmates trying to put together a class reunion

Hello my name is Kathleen Krueger Godfrey. My brother Clete Krueger and I both attended St. Augustine's. He was older. We attended kindergarten through the eighth grade. I attended from 1951 until 1960. The Sisters of Charity ran the school and Monsignor Biter was our Priest. My Kindergarten teacher was Mrs. Baumgartner. My favorite nun was Sister Mary Lucy. She gave me self confidence that I lacked. Very happy memories of the Marlborough District, St. Augustine's and our home at 1530 E. 80th St. I was always proud of our church and school.

I remember a Sister Virginia was extremely sweet... My sister and I attended in 1977-79

I attended St Augustine School from 1960 to 1966 I Rode the bus to school up until 1963 when Bus service ended.I Began walking or riding my bike the 16 blocks in the fall of 1963. Wonderful Memories of the nuns especially Sister Janet Marie Rosara my Second grade teacher 1961-62 and part time mother.We used to have the school Picnic at Swope Park and visit the Zoo as well every year. My fondest memory or experience at the picnic was seeing the nuns reach in the huge galvanized tub filled with Ice and soda pop and pull out an orange crush or Root beer and guzzle it down. See at that time we were under the impression they only drank Holy Water!!!! Monsignor Biden was our head Priest back then.One other quick humorous memory during the Cuban missle crisis which in second grade I didn't understand much about it at the time other than our Janitor at the schools name was Mr Castro. Whom I thought along with some other kids was the fellow pointing the Rockets (Missles) at us.Why would we let him work there and cause trouble for Mr Kennedy???

Who was the long time secretary?