This is one I found by accident about a year ago as I was looking at St. Joseph/St. Benedict: Saints Cyril and Methodius Church. 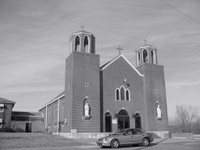 The church is supposed to have been built in 1906. I, with my limited knowledge (some would say my non-existent knowledge) of ecclesiastical architecture, find

that hard to believe. Perhaps the exterior was rennovated or something? I dunno, it just has a 1940's look about the place, and the abandoned school building, which supposedly would have been built after the church, actually looks older.

I haven't seen inside. When I first found this church last year, and again when I took this picture last week, the doors were locked, and I couldn't see anything through the closed vestibule doors. Given that the vestibule doors themselves were clad in faux-marble formica, I'm not optimistic about what may have happened to the sanctuary, but I really ought to figure out the Mass schedule and get a peek inside. 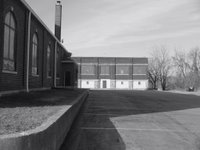 Other than the excerpt for the 1911 Wyandotte County history which I'm pasting in below, and which indicates that this is a Slavic church, I don't have any further information. If you do know something about it, please comment.

ST. CYRIL AND METHODIUS CHURCH.
The great influx of Slavs in Kansas City, Kansas, made it necessary to establish a parish and give them a priest who spoke their own language. The Rev. F. J. Kulisek, former pastor of St. Joseph's church, which made such rapid strides under his pastorate, is now pastor of the new parish. Father Kulisek speaks several languages, which makes him a very important priest in Kansas City, where so many foreign tongues are spoken.
The congregation has erected a two story brick building on the corner of Mill street and Ridge avenue, the first story of which is used for school rooms and the second, for a church. During the past five years improvements and property to the amount of about $18,000 have been added.
St. George's church (Servian), is at No. 37 North First street, and the Holy Family church (Slavic) is at No. 513 Ohio avenue.

On Good Friday, I stopped by Ss. Cyril and Methodius. Services were going on, and I parked next to a big American car--a Buick--that had the license plate JPKKCK. As I wandered in, I was trying to figure out whose car it was, but when I walked inside, the license plate made sense. The plate was for James P. Kelleher, of Kansas City, Kansas. Yes, His Excellency, the Archbishop Emeritus was celebrating Good Friday liturgy with about fifty or sixty people in attendence. I looked inside briefly, then went up the street to see if I could get into St. Joseph's, which I did. 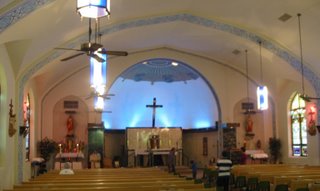 After taking pictures at St. Josephs (with poor results), the liturgy had ended, and I could slip into Ss. Cyril and Methodius without much notice.

As noted in my original post, the church had been redone in the forties or fifties (I'd guess) with lots of faux-marble formica. I'd date the redo to sometime prior to any changes in the Mass,

because it seems that the sanctuary was originally remodelled for the old Mass--the faux marble formica seemed to form a reredos of sorts. That's just speculation of course. Anyways, I didn't want to wander around and draw attention to myself, particularly the attention of the Archbishop or his MC who must have been unvesting in the sacristy, so I took a couple of quick pictures, smiled at the old ladies, and left with a compliment. The nave is pretty, with its stencilling and all, but it's a very small little church--much like you'd expect to find in a little mostly-protestant town of 5,000 or 10,000 people. It reminded me of a church I saw in the Texas panhandle once (although it was much smaller) built in the 1930s and kind of low-slung, like everything on the high plains.

Do share information about this church if you have it.
Posted by Curmudgeon at 10:51 PM

As a funeral director, I have had the opportunity to visit almost all of the Catholic churches on both sides of the state line and really enjoy reading about their histories - especially the ones that have long been closed. Fascinating stuff!

St. Cyril's has long been the church of my husband's family, but it looks as though the end may be near...very sad

As a mainstay in my family Ss. Cyril's is s Lithuanian built parish with s large amount of Hispanic parishioners as well. It was redone in the early 60's. My Uncle, Joe Martel, painted the mutual above the altar for the last time in the late 60's. It is a hope of the community that the church can be saved but a great possibility that it will be torn disown. The school, last graduating class was 1969, is being Demo'd this next week. Ss Cyril's has a great history but like much of KCK has fallen prey to age and neglect.

St. Cyril, where I was baptised, is a Slovak (Slovakia) national parish. Obviously today it is regarded as hispanic but it was originally Slovak. Many immigrants came from an area that covers mainly the Podkarpackie region of Poland, but being so close to Slovakia some of the immigrants from there came too. St. Casimir was the Lithuanian parish. I do not know the back story but I know it was also in the Polish Hill area

The old Slavic/Eastern European KCK churches are as follows,

There was a short lasting Ukrainian Orthodox church that lasted for a short bit before closing its doors way back when.

This parish has now closed and is now a Korean Baptist Church.