wwAs I've indicated before, our tour of Kansas City, Kansas churches will include open churches, because (quite happily) 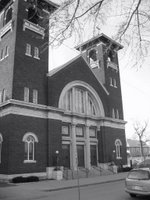 most of the historic churches there are still in use (although few of them have their own resident priest--I think most are served by circuit-riders who have two or three parishes). We've looked at three that are closed so far: St. Mary's, St. Thomas, and St. Benedict, and I know of at least one more, Our Lady of _______, somewhere in the Quindaro area, but I don't know exactly where. I'll find it someday. For now, though, let's move on . . . 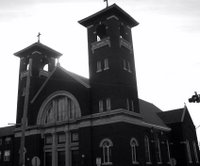 St. Joseph's, now titled St. Joseph/St. Benedict. Here are two photos of church, at Mill and Vermont. Couldn't get a straight-on shot of the facade, because it's surrounded by narrow streets and houses.

The facade is symetrical, and the design seems to be

pretty contemporary for the period in which it was built, rather than a throwback to grand Gothic or Renaisance or Boroque styles like we see in Missouri churches of that era. The inside is nice--a pretty little parish church--as I recall from my visit there a couple of years ago (the church was locked on the morning I went by to take pictures).

Although there's a newfangled altar table in the sanctuary, the old high altar and the side altars are intact. When I get around to doing some research, I'll update this, but I'm in a rush, this will have to do.

Feel free, anyone, to chime in with information.

I found more information on the web about the founding of St. Joseph's. This is taken from the History of Wyandotte County Kansas and its People ed. and comp. by Perl W. Morgan. Chicago, The Lewis publishing company, 1911. 2 v. front., illus., plates, ports., fold. map. 28 cm. [Vol. 2 contains biographical data. Paged continuously.]

ST. JOSEPH'S POLISH CHURCH.
The St. Joseph's Polish church, located at Vermont avenue and South Eighth street, may rightly be called the mother of several other churches in Kansas City, Kansas. Though organized originally for Polish people, its location causes it to be used by not only the Poles, but by the English, Slovaks, Croatians and other nationalities. As these people became more numerous, they withdrew from the St. Joseph's and built churches of their own elsewhere.
A congregation was organized by a few Poles and Slovaks in the community mentioned in 1887. The first pastor was Father Kloss. He bought four lots from Father Kuhls on which to build a church, but this was built later in the same year by Father Gajduzek. It was a frame structure and served until 1901, when it was destroyed by fire. Previous to the fire for several years the church was under the rectorship of Father Kulisek. After the fire the other nationalities withdrew from the church, leaving only the Poles. In 1902 the Rev. Alexander Simetana, the present pastor, took charge, and, with the wise council and advice of Bishop Lillis, settled the claims of the seceding races and built the present fine church which is now used exclusively by the Polish people.

On Good Friday, I stopped by St. Joseph's on my way through the area. I wish I had arrived about 10 minutes earlier, because they were just about to start the Spanish language liturgy when I arrived, and I couldn't take photographs from the nave without drawing attention to myself. (Usherette: "Sir, you don't speak Spanish?" Me: "Well, no. It's obvious?") Thus, I didn't get a picture of the interesting Madonna in the west transcept (liturgically, the south transcept), and I didn't get pictures of the murals in the clerestory. 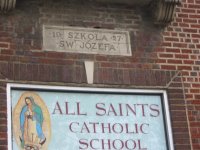 I thought I had at least obtained a decent picture of the sanctuary from the vestibule, but when I got home and blew it up (instead of just looking at it in my 1" LCD screen), I was disappointed. I'm posting it here, along with my resolution to go back some day and get better pictures of the beautiful interior which (but for the altar rail) appears to have been more or less preserved. On my way out, I took a picture of the old school building. That one is also included here.

I got back inside St. Joseph and took some (slightly) better photographs. See below.

To the left, the simple Lady altar; to the right, the grotto of Lourdes. The grotto is lost, however, behind folding chairs, mike stands, and other paraphenalia that really has no business being at the front of the church.

Nave. Note the murals in the clerestory.

Window and a Station.

Posted by Curmudgeon at 8:41 PM

The Quindaro Church is Our Lady and St Rose (of Lima). I don't know which was the original. St Phillipine's has Holy Thursday services there, but I've never looked at the cornerstone. Sorry!

I think I'm going to start a new hobby.

It will involve dressing up like a tourist, going into beautiful old churches where the altar is intact but there's a NO table and no altar rail, and, just before the Mass begins, go in, march up to the front, click a couple of pictures and in a loud voice, say to my accomplice, "Nice church. But what's that ugly table doing there?"

This is the Church attended by generations of Polish immigrants and their families. Based on oral tradition from my deceased mother-in-law, after the fire, the congregation built the new church. My husband's grandfather, as did every male church member, carried the stones and building supplies up the hill to the site. Each male was responsible for so many stones. Families who could, contributed a beautiful window as the ones that are posted here. You can see their name on the plaque beneath the window. If you ever go back, look for the Pagacz window. My husband's grandfather Gabriel paid for it. At the top
of the altar which you can't see in this picture is "The Black Madonna of Częstochowa" a revered icon of the Virgin Mary housed at the Jasna Góra Monastery in Częstochowa, Poland.I am sure it can be found in any Catholic Polish Church. Two of my children were baptised there in the early years of my marriage when we lived in the neighborhood. Father Dan Gardner, formerly from St. Patrick's parish, is the current pastor and was sent to learn Spanish before being given that assignment. Last year,I attended a funeral and the choir sang in Polish. I asked Father Gardner how long he was away to learn Spanish and he told me three weeks. lol