We'll start our last trip (for now) around Kansas City, Missouri by covering three sites where churches no longer stand. We'll do so in one post so we can move on to some more interesting things for tomorrow. 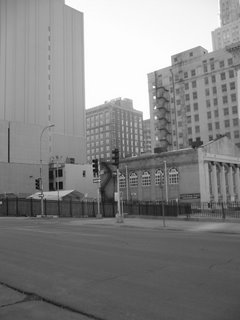 First, where there is now a heavily secured surface parking lot for the Federal Reserve Bank of Kansas City at the southwest corner of 9th & McGee downtown, a few blocks from where Old St. Patrick's Oratory stands, and not far from the Church (eventually the Cathedral) of the Immaculate Conception, there once stood Ss. Peter & Paul Catholic Church. The columned building you see in the picture isn't Ss Peter & Paul: it's the Grand Avenue Temple, a methodist church building which may, or may not, still be in use. I'd guess it isn't.

I still don't have the checkout copy of This Far by Faith, so I can't offer much in the way of detail (I'll update this when I do), but from what I understand on a cursory reading, Ss. Peter & Paul wasn't so much suppressed as it was relocated south and split into various other parishes as Kansas City and its Catholic population grew. I read somewhere that Our Lady of Hallmar, er, Our Lady of Sorrows, on Gillham Road, is the canonical successor parish to what was Ss. Peter & Paul (which may explain the great statues of these two apostles standing watch over the altar at Sorrows).

St. Mark's was the "ecumenical parish" I mentioned in this previous post. No new information, except that it was located at the physical site of an episcopalian "ecclesial community," at East 12th Terrace & Vine. I didn't get a picture of the site (there was no convenient place to park, and it wasn't interesting enough to warrant getting all the little Curmudgeons out of the car), but there is a community center in the middle of a low income housing development at that location now.

At 1001 East 19th Street once stood St. Joseph's Church. This is a block east of the Tension Envelope Building, at the base of Hospital Hill. 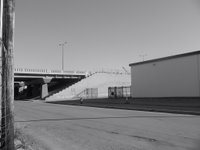 As you can see, this address is now a bridge abutment. The site was cleared to make room for Bruce R. Watkins Drive, which was built only in the last five years or so. I don't know if the church building was razed for highway construction, or if it had been pulled down before then for construction of the industrial buildings on either side of the highway. I do have a note, barely legible, that I made on St. Joseph's: in 1940, the parish, which then boasted 17 members, was folded into St. Monica's.

That's it for the vacant lots, kids. Next up will be St. Mary's/Immaculate Heart, followed by St. John's Seminary and St. Augustine's. Then we're done with KCMO, unless someone gets me some new leads.
Posted by Curmudgeon at 8:05 PM