As we move back up the hill from the Argentine neighborhood, towards downtown Kansas City, Kansas, we pass an old hulk of an abandoned hospital, (St. Joseph's) and we see two spires. 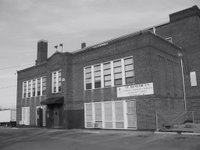 The spires (which we'll show tomorrow) are for St. Joseph/St. Benedict Catholic Church, which is located in the former St. Joseph church building. Tomorrow, we'll look at the exterior of that building, but right now, we'll just peer over to the next block to the old St. Benedict's school, at 220 South 9th Street. There is no church now standing at the St. Benedict's site, and I understand the old school is now a special-needs childcare center operated in connection with Catholic Charities.

Again, I don't have any history on St. Joseph's or St. Benedict's yet, but I'm hypothesizing from the clues around St. Joseph's church (i.e., Polish banners, Polish bars, Polish inscriptions on old cornerstones) that St. Joseph's was founded by Poles, and perhaps 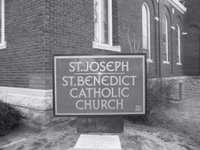 (this is a totally unfounded guess) St. Benedict's was neighborhood's English church before consolidation. When I googled St. Benedict's, the only hint I could come up with was a note in the Notre Dame library catalogue suggesting that the consolidation might have happened sometime around 1952 (that's the date the parish history in the ND record ends). We'll see if my hypotheses hold once I get to check the history.

I found more information on the web about the founding of St. Benedict's. This is taken from the History of Wyandotte County Kansas and its People ed. and comp. by Perl W. Morgan. Chicago, The Lewis publishing company, 1911. 2 v. front., illus., plates, ports., fold. map. 28 cm. [Vol. 2 contains biographical data. Paged continuously.]


ST. BENEDICT'S CHURCH.
St. Benedict's parish was organized in 1903 by Father Philip William, who came to Kansas City, Kansas, from the Benedictine College at Atchison, where, for six years he held the professorship of oratory. During 1902 Father William built a frame school and church on Pacific avenue, near Boeke street, and later the structure was veneered with brick. Subsequently, a church edifice was erected on Boeke street. The school started seven years ago with sixty pupils and already has increased to three hundred and fifty, an indication of the growth of that city in sparsely settled districts.
Father William was born in Leavenworth in 1869. Early in life he determined to become a member of the teaching order of Benedictines, and joined the order when he was sixteen years old. He expected to devote his life to teaching but his talents in other directions are so great that his work has been changed.
Posted by Curmudgeon at 9:34 PM

I graduated from St. Benedicts School in 1967. We had Benedictine Sisters of Atcheson Kansas, and Benedictine priests of the same. The last priest at St Benedict's was Rev. Ambrose Keating OSB. The school was considered to be the Irish School and St. Joseph was the Polish School. (Their kids spoke Polish it was undstood - we never learned Gaelic!)Our common 'enemy' at the time were the ruffians of Central Junior High School, who came out to fight on our school grounds in the afternoons. I remember the Sisters trying to keep us away from the windows when that happend. ...memories!

I agree, St Benedict's was an Irish Parish, my grandparents Maragret C. Connors and John Larkin Bean, Jr. were wedded there as well as my parents Margaret Hester Bean and Harold Jackson Scott. My mother was not permitted a church wedding as my father claimed no faith and and unions of catholic to no-catholic marriages we not only frowned upon, but my parents were married in the Rectory (Priest home) on Jan. 16th, 1943.

I attended St. Benedicts from 1951until 1959, it was known as an Irish Congretation, but there was also a large Italian Congretation also which I was a part of. My Grandparents attended there along with their relatives & friends from the region on Palermo Sicily,
all their desendants, and all the third generation decendants were baptised and confirmed there. So for some of us The St. Benedicts Parish was more of a family affair,
all of our family ties were attached to the church.
Some of the Italian familys were the Billaci's,Amino's Ventura's,Alonge's,Patti's Saragusa's,Mancuso's and many more.
Like almost all the Catholic Church's in KCK, had bowling alleys,and a dance floor, they used to hold on Sunday eve's a dance with a live band and called it St. Benedict's Teen Town. It was truly a wonderful neighborhood to be raised as a child.

My brother and I also attended St. Benedict's for our first few years. I remember some of the Pattis, Venturas, Saragusas. That would have been in the late fifties. Remember the little store the Pattis owned? I haven't been in that area for years but have very fond memories. Are there any other former students on Facebook?

It would be fun if someone would put a Saint Benedicts blog on Facebook. I loved the school and the people were wonderful. We had so much fun. I wish I were more knowledgeable with the computer, I would do it myself. I found one old friend from St. Benedict's this week, it was incredable making that connection again after 40 some years and catching up.

Does anyone know when the hospital was abandon or who owns it? Feel free to reply here or call/text me.

There is NOW a site on FACEBOOK called "St. Benedicts Grade School KCK Alums". During the fall of 2013, they took down our Grade School and that is when the Facebook site was formed. I lived exactly across the street from the Grade School and it looks so empty now. My Brother still lives in the house we grew up in and I see the bare school grounds everytime I go to visit.

I have a statue from the original St Benedict church. My mother purchased 3 "life sized" statues in 1976 when the church closed . 5 ft statue of Our Lady of Sorrow. Purchased from the Departo- Rigalli statuaty in Chicago

St. Marg. Hosp merged with Providence in about 1973 and in 1976 a new hospital opened on 91st and Parallel. The old St Marg hospital is now senior living appartments.