In the Argentine neighborhood of Kansas City, Kansas, at 2910 Strong, 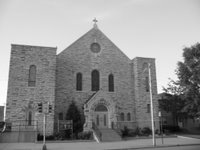 on the south bank of the Kaw River across from the closed St. Thomas is St. John the Evangelist.

I do have the following history from the 1911 history of Wyandotte County:

ST. JOHN'S CHURCH, ARGENTINE.
St. John's Roman Catholic church in Argentine was dedicated in September, 1907. The new church was built with money from the earnings of the laboring men of the parish, the old edifice having been destroyed by the flood of 1903. The new building is of native stone, quarried from the hills near Argentine, and cost $30,000. The dedicatory services were conducted by the Right Rev. Thomas F. Lillis, Bishop of the Leavenworth diocese. 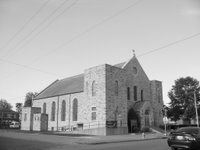 The Rev. Father L. J. Beck, who had charge of the parish, does not believe in building churches unless the money is given by the members of the parish. When the flood waters receded from Argentine the little church in which St. John's congregation had worshiped was a wreck, the roof of the church had fallen and the altar had been destroyed. The homes of more than half of the members of the congregation were also swept away. The congregation has held its services in the school building since the flood.

Anyways, up on the facade of the "new" church, at least 20 feet above ground level, there is a marker showing the 1903 water level. After 1911, I have little history. I did find an internet reference to Mexican children attending St. John's school between 1915 and 1923, which would have been the time of the mass immigration in the 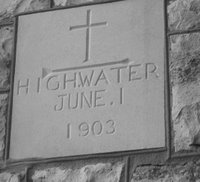 face of the Masonic revolutions down there. Based on what I could find out in my research on St. Thomas, St. John absorbed most of the remaining parishioners once St. Thomas was closed after the later floods in the 1950s.

It was a Thursday evening when I went by, and so once again, I was unable to get interior pictures. If you have interior pictures of St. John the Evangelist, or some post 1911 history, please pass them along.
Posted by Curmudgeon at 10:06 PM