It looks as though Sacred Heart church, at South 34th Street and Shawnee (south of the Kaw, and 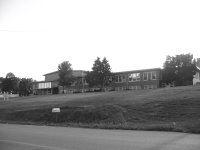 south of the Argentine District) in Kansas City, Kansas, was built in the 1940s or early 1950s or so. I didn't see a cornerstone when I drove by it last week on my resumed tour of 'Dotte parishes (which, actually, doubled as an excuse to take the little Curmudgeons out for hamburgers at Fritz's Railroad Cafe--Wyandotte county's best dining experience for anyone under 10).

So far in my tour, it's the newest of the Wyandotte County churches that is potentially on the chopping block. From the outside, it looks a lot like a gym. I didn't get a look inside, however. I don't have any history on Sacred Heart. 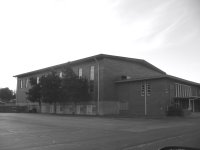 I wonder if it was the original church, but I really doubt it. The neighborhood seems a fair bit older than the church, and It's hard to tell whether, in looking at the building, the church was intended to serve for a while as a church and then be converted into a gymnasium at a later time when they raised money for a church, or whether the church was originally a gymnasium and converted into the church when the old one was deemed to be inadequate.

Anyways, architecturally, Sacred Heart would be little loss to the diocese; however, it does seem to be some distance from its two neighboring parish churches, Holy Name (in the Turkey Creek bottoms along Southwest Boulevard) and St. John the Evangelist (in the Argentine neighborhood), so it would certainly be hard on the folks in that neighborhood to lose their parish.

Again, I renew my call for more information. If you know a little history of Sacred Heart, please fill us in!
Posted by Curmudgeon at 9:32 PM

Sacred Heart, I believe, after WWII. It was in response to the growing neighborhood after the time of the war. The new Sacred Heart which was out in Bonner Springs, KS was burned and the dioceses moved it to Shawnee.
I've talked to priests about what it would take to keep a parish open which could be slated for closing. Briefly, location, financial well being and attendance. The latter two items are generally controlled by soundness of doctrine.

Hi there, I was googling information on the church/school I will be employed in this fall. Interesting notes on the church! When I interviewed and took the tour, I was told that the church was originally intended to be a gym, however, it became the church and no gym was ever established. I hope it all stays open long enough for me to have a job! Thanks. Oh, and also, I noted on the side of the building the date 1951. For whatever reason the school is called Our Lady of Unity, rather than Sacred Heart which must have been the original school name.

Sacred Heart is my home parish. I grew up a half block away. It was the second church built by the parish, the first one being a bit further south down 34th St...about 1/2 mile or so. You can still see it there today if you drive down the road toward Merriam Lane. Right on top of the little hill next to the old church was the rectory and in between the church and the rectory was the convent.

It was built originally to be a gym once parishoners got the money to build a church. The money never came. It is a simple parish church...nothing ornate but the people that make up the parish are extraordinary. They are men and women of deep faith and commitment to God and to one another. They were good role models for us younger members.

The school was staffed by the Benedictine Sisters of Atchison and it was top notch! It is called Our Lady of Unity school today since Sacred Heart merged with St. John the Evangelist.

I am proud to say that it was and is my home parish although I live in Atchison now.

I was pleased to read the comments from other folks here in this blog about Sacred Heart Church and School.

I attended this church and school for 1st and 2nd grade, (1965 - 1966) and was curious about archived material and class photos that might be available to research, especially during my years of attendance. I don't recall class pictures or year books, but if they had been availble I guess, my family at that time could not afford it.

I was Baptized and attended the first 5 grades at Sacred Heart Church and School. Father Julian Theinpont was the Pastor, and Benedictine Sister Vernona was my teacher. I was born in 1934 and have many memories of this Church and School. The 2 room school was located under the Church. I disagree with the note dated November 17, 2006 that the Church was built as a gym. My Mother and Father were married in this Church by Father DeBouck and it was used as a church at that time not a gym.
Very few Catholic schools had or even thought of haveing gyms at that time. I have my grade cards from school and the heading is: Sacred Heart School.
Vern326@aol.com

I attended the Our Lady Of Unity School from Pre-K through 7th grade. I believe it is a wonderful school and actually found this thread while researching the cost of tuition. I am considering sending my son there for kindergarten. the Church part, Sacred Heart, is small, but very much an active part of the community. I would be sad to hear of it closing. I don't actually attend mass at Sacred Heart, but St. John's the Evangelist, which is a parish I love and would never leave. I am happy to read all of the wonderful comments from others who feel the same way.