Our Lady of Guadalupe Shrine

Here's a new church I got some photos of. I haven't done my homework in This Far by Faith yet, but I will. 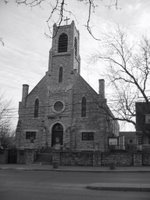 Our Lady of Guadalupe, in Kansas City's westside, was consolidated at some point with Sacred Heart church. The building is now a shrine, featuring one weekday Mass and one scheduled Rosary every week. I've never been inside, and I'm uncertain whether the Blessed Sacrament remains reserved here.

Without knowing more (such as whether this was an ethnic parish), I'd guess this is perhaps another case of overbuilding. The church (which is somewhat smaller than the other closed churches I've featured, appearing to maybe seat 500, from an outside look) 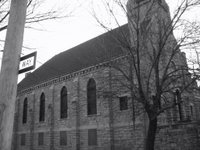 is only three or four blocks from Sacred Heart. Why were two churches built so close together? What's the deal? I couldn't find a cornerstone. When was this built? When was it officially suppressed?

At some point, I'll do my homework and fill in details.

OK, I'm doing my homework: in 1910, the year the Mexican Revolution began (the one that lasted, basically, until 1928 or so, and that featured evil Masonic persecutions of the Church), a colony of refugees began forming on Kansas City's West Side, around 23rd and Madison. Among 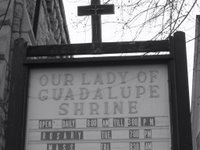 the poor, hungry immigrants were a few refugee priests who managed to avoid the firing squads. The people of nearby Sacred Heart Parish found out about the priests and got them before the Bishop in order have them granted faculties. As the revolutions and persecutions continued in Mexico, new waves of immigrants arrived, and in 1914 a parish was formed for them and a chapel was erected in a vacant house. Shortly thereafter, the parish moved to a vacant storeroom, and they began to plan and pray (mostly pray, as they didn't have any money to plan with) for a church.

In 1919, the Swedish Evangelical Lutheran Emanuel church building at 23rd and Madison was put up for sale (the Lutheran ministers intended to follow the Swedes, who were moving to the Westport area). The church building and minister's house, which had been built for $100,000 and was listed at $65,000, was eventually purchased for $18,000 through the efforts of Dr. Thomas Purcell, the Sacred Heart parishioner who originally found the priests among the refugees.

Thus, in converse to what we've seen at Holy Name, Blessed Sacrament, Holy Trinity, and St. Francis Seraph, a church built by heretics was eventually taken over for Catholic use. The only changes to the building that were necessary were the removal of Martin Luther's mug from one stained glass window and the addition of an altar (which was donated by the Redemptorists). Other furnishings, and ongoing support, was given surrounding parishes and Catholic organizations.

Posted by Curmudgeon at 8:17 PM

you really don't know or care what this shrine means to the westside hispanic community, nor do you have you're facts right i suggest you contack th president of the shrine association her name is Ramona Arroyo

Well, if my facts in the update are wrong, then Fr. Coleman is wrong, because I got it out of his book, This Far by Faith

As for what it means to the Westside Hispanics (perhaps we should simply say Mexicans, because as I understand it, it was Mexican refugees from the masonic revolution there, not folks from Venezuela or Chile), I don't suppose I do. But I didn't attempt to represent otherwise, now did I? I would guess it would mean a lot...it was a spiritual home and secondarily a point of fellowship by a lot of people who were brutally misplaced by the evil that overran Mexico in the early 20th century (undoubtedly caused in large part by protestant Yankee meddling south of the border in the mid-19th century).

I can't see why you're offended, unless of course you're one of that growing crowd of people who go out of their way to take offence at anything.

Relax. No one on this site has claimed to be a scholar on the subject. The author is simply stating what is believed to be fact. That does not necessarily make it fact. Instead of persecuting someone for the inaccuracy of a subject with your supreme wiseness you could share some knowledge (should you have any).

I read and re-read your website often and still wish you had the time and the fortitude to get more of the site updated. Anyway, Sacred Heart/OLG. I have a burr up my butt about the spirit of welcoming "aliens" to our country especially "Mexicans" as catholics. It seems to me that being an "illegal alien" from across the border has brought with it a sacred theology to the local bishops who have seemed to be going out of their way to force all of us "other" catholics to be more socially aware. That awareness often is interpreted as making sure that there are more masses being said in spanish, more priests being trained in spanish, more hispanic men being trained as priests and deacons to support the unbelievable numbers of "aliens" of the spanish tongue. In reality, most aliens don't go to church and if they do rarely support the church in the plate.

The other day I was listening to a representative from New Jersey who is famous for being a very vocal supporter of immigration rights and who is seen on Fox News quite often. He made a passing remark that I'm sure most people didn't hear when he said "....I went to mass yesterday in spanish..." I said to myself, is this the reason why we have spanish language masses so that non-aliens can go to mass in their native tongue? What a waste of manpower, what a waste of money. I suspect that if the truth be known many catholics who have moved here from far-away lands would love nothing more than to have a mass said in their native language. In my church their are many Philippino's and Chinese so does that mean that Tagalog and Mandarine are necessary languages for priests to learn? I think not. To solve all of these issues with language, I submit that the Powers That Be change the mass back to Latin, that would make me and the Curmudgeon very happy.

Lifelong member Our Lady of Guadalupe parish here and yes many of your facts are not completely correct.Yes the neighborhood was once Lutheran,but next came the Irish,then The Mexican people. I am the product of both and every bit a Catholic as the next Man.I was born and raised and still live on The Westside of Kansas City. If I were ever to go to a fabled homeland (Mexico) I could walk there. Where as You'd have one hell oof a swim European!