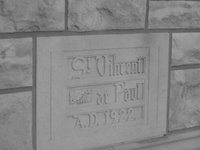 From the two saddest cases I know of--Holy Name and Blessed Sacrament, to one with some hope: St. Vincent de Paul at Flora & Linwood (the 3100 block of the Paseo) was built, appropriately enough, under the guidance of the Vincentians in 1922, and closed by the diocese at some point before 1980; however, it was "rescued" by the SSPX with the help of a protestant preacher who served as intermediary, and it has been reasonably well-maintained by the SSPX for the last twenty-five years. The SSPX began operating there in 1981, seven years before the . . . incident. Somehow, all the furnishings, statues, and windows stayed with the church, and because it's in SSPX hands, one can actually get inside to see the interior (and reverence the Blessed Sacrament, of course). 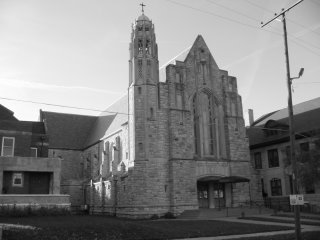 This is not the prettiest church in the Diocese of Kansas City-St. Joseph (Our Lady of Perpetual Help/Redemptorist, is the hands-down prettiest, and Our Lady of Sorrows--with the altarpiece that inspired Joyce Hall to create Hallmark's gold crown logo--is perhaps in second place).

St. Vincent de Paul is not richly appointed like those other two churches. It seems like the builders spent all their money on the structure, with little left for the interior. However, it's certainly the most majestic of all of the Kansas City's churches, and perhaps the most authentic, least "Americanized" tribute to the gothic form around town. I don't know much about architecture, but it feels very English (whereas Redemtorist feels unmistakably French, and Sorrows is, well, kind of northern Italian on the outside and kind of baroque German on the inside. St. Vincent's has a long nave, a cedar roof and reredos, a nifty baptistry, functional side altars, and a number of confessionals (not as many as Redemptorist, though). The church actually has a choir area with a dozen or so stalls behind the altar rail, between the transcept and the sanctuary. This next picture, taken from the west side of the Paseo, shows just the choir and gives you a better sense of scale. The Vincentians were undoubtedly practical men who where making the most of the land they had to work with, but it's a real shame that the school building was built so close to the church that it interferes with the view. 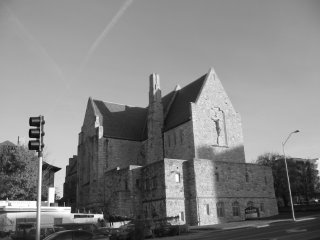 Anyways, St. Vincent's may not be the best backdrop for wedding pictures, but it's the kind of place you can imagine a duke receiving his coronet in, the sort of place being pillaged by Henry VIII's and Elizabeth's henchmen, and the kind of place you can almost hear Gregorian chant echoing in (of course, there's no imagination necessary on that last count. I suppose one really does hear chant every Sunday there, although I've never had occasion to be there during a High Mass).

I found a little information on this church, in back issues of The Angelus magazine, that I'm linking to, noting the purchase and rededication of the building by the SSPX. Whatever yout think about the SSPX situation, you have to be happy that the building is intact and in Catholic hands with a real chance of becoming a canonically regular church again someday.

One can only hope that, when the rift between the society and the hierarchy is resolved and as the old Mass becomes more widely available, this beautiful church on an ugly corner of Kansas City isn't forgotten. 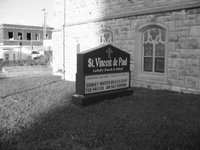 If you've got more information on the building, do please add a comment or email me.

[Remember, you can see these photos enlarged by clicking on them]

Just a little more information on St. Vincent de Paul, which I first featured on November 8—I didn't get all the way through the entry before I got the "Really, sir, we're closing and you'll have to leave" speech at the library last week.In 1975, the parish was suppressed and folded in with Holy Name and Annunciation to create the Church o' the Risen Christ. At the time of closure, The Vincentians deeded the parish to the diocese, with it still subject to $80,000 in debt. More to come, but I do have one rather catty comment for now. I was inside the Church a couple of years ago, and again recently, and I noticed that in that time, someone painted around the small windows (in the side aisles) in some sort of dusty rose or mauve or something. Whatever they were trying to do, it didn't work. Or perhaps one of the former KC-SJ bishop's church decorators broke into the church to play a trick on the SSPX?

More on St. Vincents
Well, I can eliminate the detailed history of St. Vincent de Paul Catholic Church from my "to do" list. Someone brought the SSPX newsletter, The Regina Coeli Report, (CLICK HERE) for this month to my attention. Their article, occasioned by the twenty-fifth anniversary of the acquisition of the abandoned church by the SSPX, is much thorough than I would have managed, even with a little more time in the library.

Posted by Curmudgeon at 7:23 PM

Interesting article. I want to add that you can, indeed, hear authentic and inspiring Gregorian Chant echoing through the church on a weekly basis (I attend Mass at St. Vincent's). Their choir is one of the best in the city! The men sound like the monks of Solemnes.

The painting around the windows and in the baptistery, the painting and gold leafing of the statues and reredos detail, and baptistery grill, the conversion of a side transept into a mother's nursing room, were done (commissioned) by the former pastor, Fr. Dean.

Since then, much structural repair (there were significant leaks) has been done and the vestibule and front doors have been updated (cleaned, painted, stained, etc.) A security system and new sound system were also installed.

There is still a lot of repair and upkeep to be done and I'm sure Fr. Violette would not mind some cash for a good cause. :-)